It’s been a few months that I ‘m intrigued by these Fire tablets sold by Amazon . Fortunately, I was able to get hold of the Fire HD version 7 release in late 2014. The opportunity to make a test properly .
First of all, a short presentation is clear: this tablet works with Android. It is close to what you find in other tablet manufacturers.

However, as it is sold by Amazon only applications available on the App Store Amazon can be installed . So if you are looking for a tablet that works with the Google Play “standard” , you can already go your way .

For the others, we can begin testing this model of Fire HD7 ( release late 2014 ) Storage 16GB

The e-book reader kindle fire is made of plastic . This is the first point that marks because when got used to the Apple universe and Their metal finishes , it’s pretty disappointing.

From a visual point of view, it is not disturbing. Once ignored the material used, one can even say that it is rather nice with Their contrasting look: white for the background and black for the top of the touch screen . (besides other colors are available for background)

The Fire HD 7 also seems solid. I could show it to different people who were pleasantly surprised by the design of the whole.

Strictly speaking, his only fault was to do a little “toy” once off. This is the major complaint for choosing a version in two colors depending on the color you choose, the style may be a bit childish. There’s another thing that bothers me: the tablet is thicker. By measuring, it is not far from one centimeter thick. The grip is very good against and at no time was afraid that the tablet slips from our hands. On the edge of the unit, there is a headphone jack, an on / off button and volume buttons. Speaking of sound, there are two speakers that produce stereo sound. In my experience, the sound is ok for this kind of device and I find it even much clearer than my iPad 2 (which is older it’s true). There is also a mini USB port that can charge the tablet. A USB cable, a power adapter is included with the tablet: a good point. Overall, we can not say that the machine put eyeful. But the Fire HD 7 is far from shocking, so there are no bad taste in my opinion. Specifications In all good test specifications are important. But, not being a specialist in the subject, I’ll just list them and to share with you – afterwards – my impressions of using the Fire HD 7.

​Here are the components that fit this tablet :
Four heart processor ( both 1.5 GHz and 1.2 GHz 2 )
1GB RAM
7-inch screen with a resolution of 1280 x 800 pixels ( or 216 dpi)
A camera on the front (VGA) and rear ( 2 MPX )
Gorilla protective glass types for the screen
WiFi and Bluetooth connection (compatible with headphones )
Internet Storage: 16GB in the test version but also available in 8GB

In the end, it was something very classic with a processor that seems still interesting .We could also preferred 2GB RAM instead of a use but it did not feel .

Autonomy is highly variable and if you watch streaming videos from the Wifi ( Netflix , for example),it can run out very quickly ( 2 to 3 hours ) . By cons for reading books it lasts much longer (over 5 hours) .

Well,it’s time to turn to see what the Fire HD 7 features . 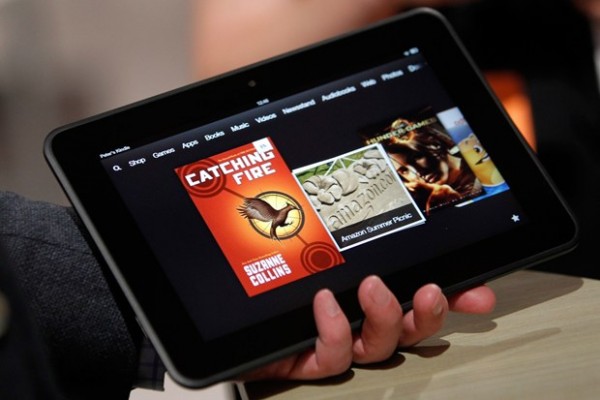 When you turn on the tablet, was immediately an advertisement that appears! This is not surprising since the model I tested is a less expensive version that displays such recommendations.

In the end, all the commercials I’ve seen are related to the tablet or Their contents, so it is not very troublesome. For example, I came across an advertisement for a protective film for the screen of Fire (see screen a little higher).

Let’s talk about the screen … I had serious doubts as to Their number of pixels, but it turns out enough to use on a diagonal 7 inches. Reading books is correct and playing movies and TV series (via Netflix app – it will come to that later) is very satisfactory!

The screen is a good point especially that the touch is very responsive.The only flaw – which is common to all the shelves – is that the black interface system is that Amazon sees many fingerprints when the brightness of the tablet is low. The reflections are also very numerous and sometimes it was difficult to photograph this screen.

After the surprise of seeing an advertisement welcome us, we arrive in the Amazon interface for the Android system.If you have ever used an Android system, we can find some benchmarks. Thus, it is possible to access the notifications and tablet settings by sliding your finger from the top of the screen down.

For against, the rest is different! This is the main complaint I have with this tablet: the Amazon interface is simpler to handle in the beginning if it has already been used to a tablet. Fortunately, you get used pretty quickly anyway.

The Kindle Fire is an Android tablet with a difference : Android is only used as a technical basis for a fully customized system by Amazon . Talking overlay would be an understatement : the interface makes the same bases of Android completely invisible.

The tablet is not approved by Google, and therefore offers no signed application by the firm in Mountain View no Gmail , no maps, no Chrome, and above all … no Play Store ! Amazon has Their own application download kiosk, the Amazon App- Shop. Obviously, no hope upload Google applications . However , the kiosk seemed to us provided enough given the intended audience : most of the ” blockbusters ” that we have sought in applications like games, were present. We note still glaring absences, such as Dropbox, but overall , the average user should find his account .

Note however that if the Play Store is not available, Amazon has retained the possibility, since the settings, activate the application download from external sources. By enabling this feature, and downloading a file explorers like ES File Explorer, available on the App Shop Amazon, so it will be possible to install any downloaded .apk file on the web, with the risk of security that entails.

Jeff Bezos has said himself: the Kindle Fire is mainly a way for Amazon to sell content to users, and a multimedia tablet Kindle more than a generalist, although other uses are permitted (web, mail …). Logically, the tablet interface is fully organized around thereof. The home screen like this, not a mosaic of how iOS or multiple office applications, but a recent carousel content used, pell-mell: web browser, applications, albums …

4-The application of Reading 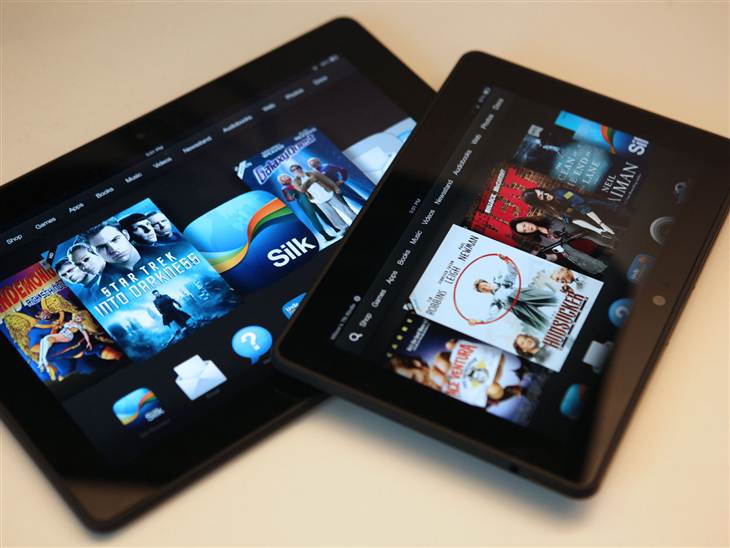 Clicking on the tab “Books” one arrives directly on the list of books that we have added to our Kindle account.It also means that the tablet synchronizes Fire alone when adding or buy a Kindle book from their account : a good point because it makes super easy use this tablet for reading.

The playback application is identical to the iPad or PC : It is indeed a good application that Amazon has developed.At any time ( and if one of the network) , it is possible to synchronize the page that has just been read . This will continue playing in the same location on another tablet, smartphone or Kindle reading light her .The customization options are sufficient and allow to read in good conditions . As always , I find reading on tablet more tiring than reading light , so do not be expected to spend hours on the Fire HD 7 – even if it’s possible.

The screen with a resolution of 1280 x 800 pixels makes the characters well . We see that Amazon has placed great emphasis on this point, since that resolution 7 inch one would expect less well defined characters.I do not have much to say about this application except that it works well and I have had no crashes . Besides , I want to indicate that the 7 inch size lends itself well to reading novels while it’s a little small for surfing the Internet .

Therefore, and not surprisingly, this tablet is well suited to reading ebooks bought on your Amazon account . It is also possible to easily access the online store to buy new books or download extracts .

As I mentioned earlier this article, the Fire HD 7 is available with Their own App Store that contains only applications approved by Amazon .The result is interesting because there is far less waste than in the Apple App Store or Google Play Google . Thus, most proposed applications work perfectly with the e-bookreader , which is appreciable .

I also got to watch some TV series episodes with the Netflix application. I am pleasantly surprised by rendering video content on this tablet as the result is good. It really is something that is very clear and quite intimate even rediscover their favorite shows or movies on a small screen (with headphones).

About applications, I must speak Program Kindle Underground: this is a selection of 100% free apps (including with free app purchases) Amazon while they are paying in competition (Apple and Google anyway).This is a good initiative that shows that Amazon wants to acquire more and more users of Their Android platform “Fire”.
Besides, I saw it was possible to install the Amazon App Store Amazon on other non Android devices (like Samsung) to enjoy. Takers …Overall, applications are usually paid, this may explain why Amazon has launched this free selection.

Finally , 3 or 4 times a year , Amazon also offers a “pack” of free applications ( although they are normally paid ) . This usually happens at Christmas , Easter and perhaps before major holidays or Valentine’s Day.In the end, there is less choice of applications on Fire HD 7 tablet , but I think the quality is still the rendezvous .

There are still a few problems I see :
if you purchased an app on Google Play , you have to buy it again on Amazon to enjoy on Their tablet, some recent and popular apps are not available .

I am impressed by this small 7-inch Fire HD tablet sold by Amazon .
So it is clearly not the most brilliant tablet it and I always prefer an iPad ( mini for example if you want a small format) , but considering Their price, which starts at 139.90 $ we can not say that being stolen on merchandise.

The e-bookreader along ten months (purchased in November 2014) and still works fine. Amazon continues to offer updates to Their system and the latest ecosystem arrived quickly (like Kindle Underground).
I already had a lot of experience with Android tablets more or less (Archos and Samsung), but I had a constant problem: after a year they become slow and builders give more or less the Update. So, they stay with their bugs and after a few months you must buy a new one. That’s why I still can not separate myself from my old iPad 2.

Now, I realize that Amazon seems rather to try to do things by ensuring proper monitoring of Their material: it is really a good point.But, clearly, this is not a machine that will suit allergic to Amazon. I even think it makes sense if you’re comfortable with the content offered by the e-commerce site.If I did not already have an account with Kindle books on it, I’m not sure I would have been convinced by the experience offered in terms of reading, for example …
For cons, I think it’s a nice little touch pad to play with some games (especially since Kindle Underground and selection of free games) and web surfing / reading his emails.

To the extent my iPad 2 suffers greatly and becomes very slow, I even consider replacing it with version 8.9 inch Fire is cheaper than iPad.

What is an FPGA Well as Why is it a Big Deal?